Richard was an electrician before becoming a driver. He decided to go into driving, because he want 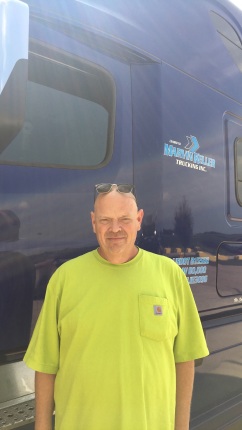 ed a change. Richard has been driving for over 20 years! He was referred by Gail Wilson, who he befriended while working at Star Transport. Before coming to Marvin Keller, Richard worked for Certified Express, in Neosho, MO. He decided to switch because he no longer wanted to haul refrigerated freight. Richard also owns four additional trucks. One of those trucks is also leased to Marvin Keller. Richard lives out of his truck, and enjoys staying out. When he isn’t driving, Richard spends time with his family and friends. He enjoys catching up on his tv shows and going to musicals. Everyone loves Richard! Richard is well known around the Marvin Keller office. He is always in a good mood, and doesn’t know a stranger. He is always willing to help out, and do what’s best for the company. He is the true definition of a team player. He is a joy to work with, and a well-rounded teammate. We are proud to have him on the team!

Before entering the trucking industry, Gail was a
Regional Manager for Subway. She decided to go into trucking because she knew she could be a great
driver, and could make a substantial living for her family. Gail has been driving for over 20 years. She started her career with Star Transport, and even worked alongside Marvin Keller’s Frank Rich! She then went on to HVH
before coming aboard. When Gail isn’t driving, she

enjoys spending time with her family and boating.Gail is an asset to the Marvin Keller Team. She has years of
experience, and a vast knowledge of the trucking industry. She is always willing to chip in and help out. She goes above and beyond for Marvin Keller! Gail has referred several owner operators to Marvin Keller. We greatly appreciate her willingness to grow the fleet.
We are grateful for Gail!